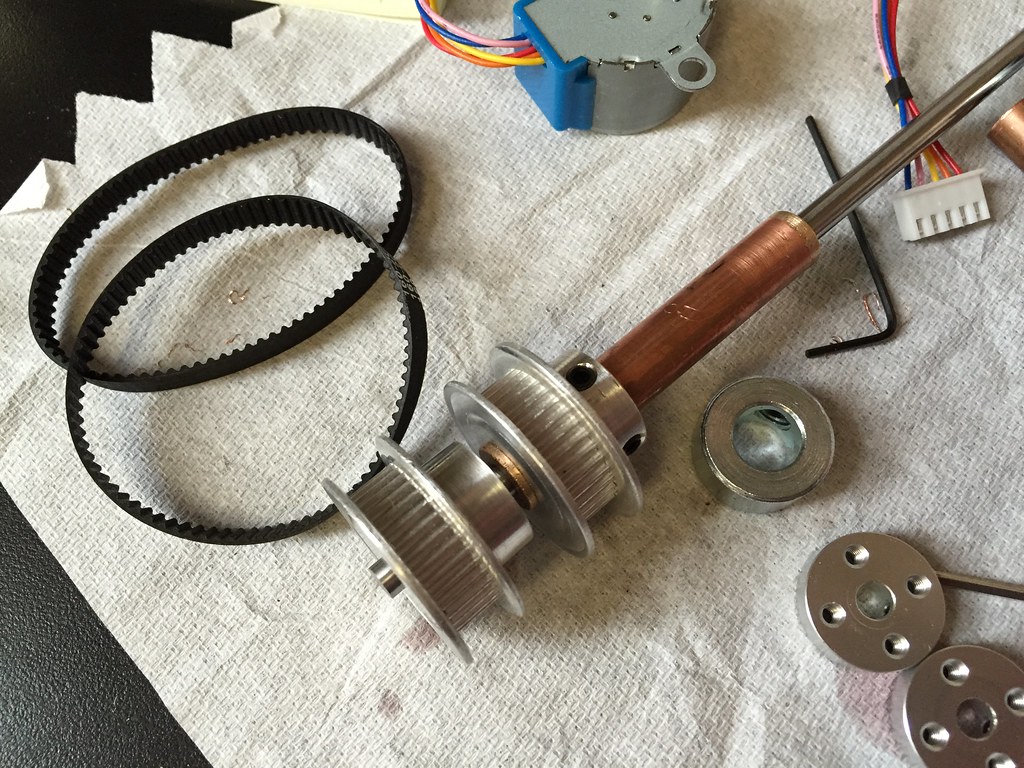 Working on a “clock” concept/project/platform with Tom Igoe and Jeff Feddersen. We’ve given ourselves a loose concept (and an even looser deadline) and we’re calling it Clock Club. I’m putting together a quick mechanical prototype for a two handed device. 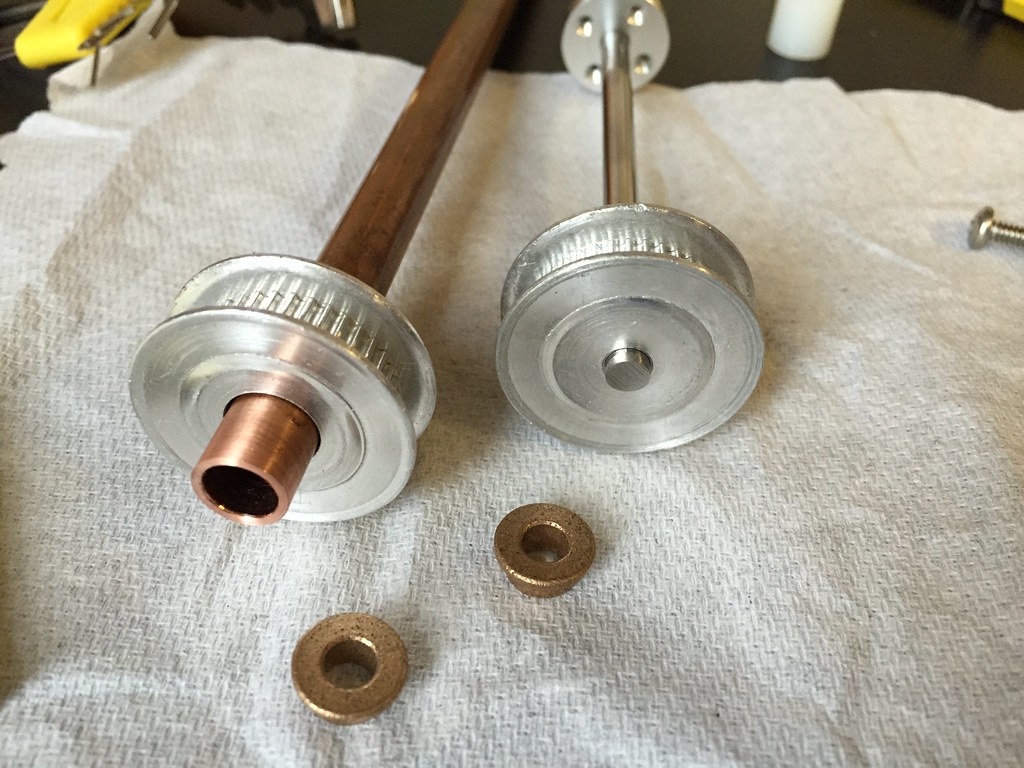 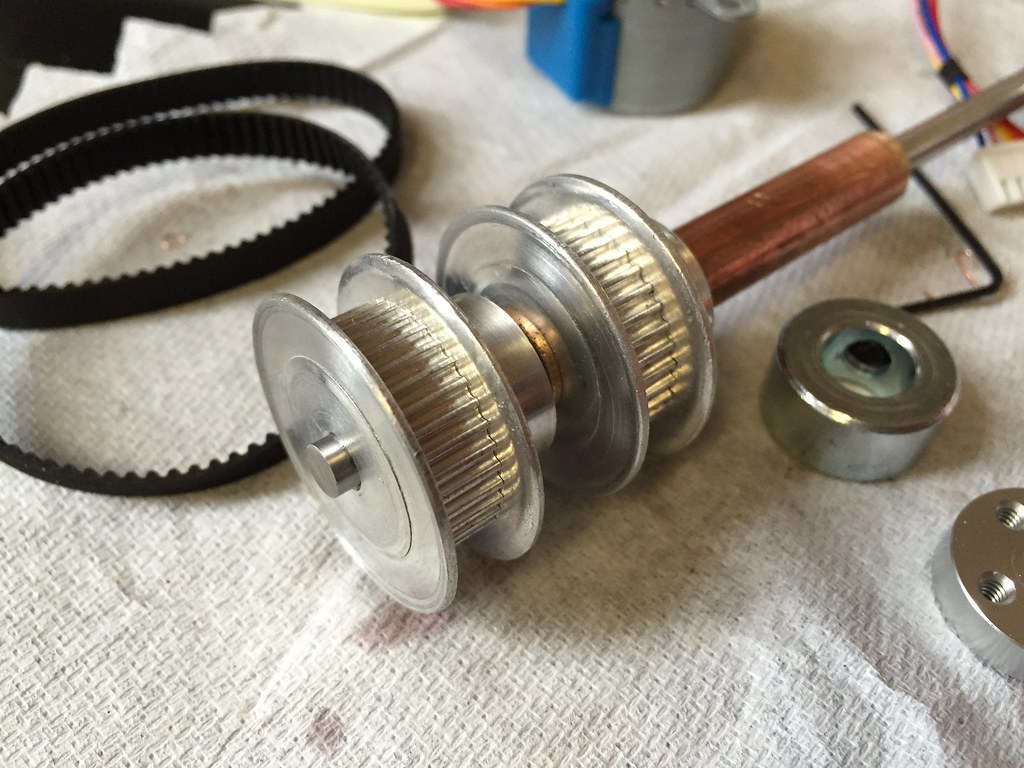 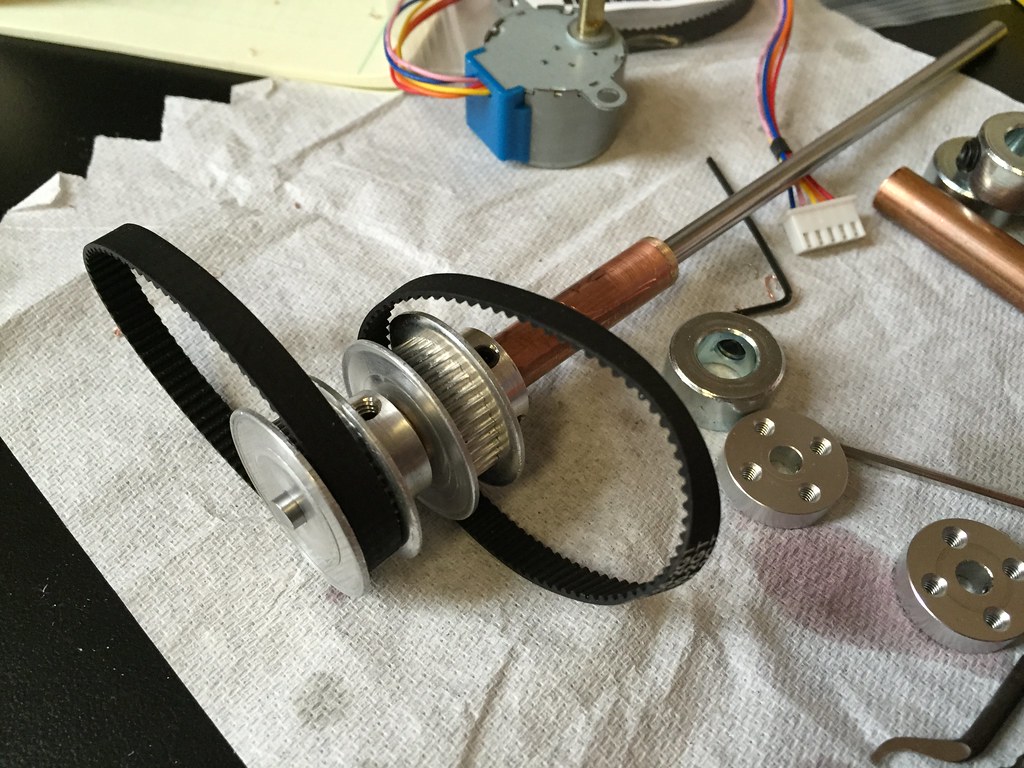 Tags: clock club, prototype
Posted in People I want to be when I grow up | No Comments »

I was lucky enough to work with a great artist and friend, Luisa Pereira, on her latest project: the Counterpointer. I just made the wooden box, Weezie and Yotam did all of the rest.

“The Counterpointer is a synthesizer that generates Baroque harmonies to a melody input by the user. The one on show at Red Bull was a collaboration between Luisa Pereira and Yotam Mann.” 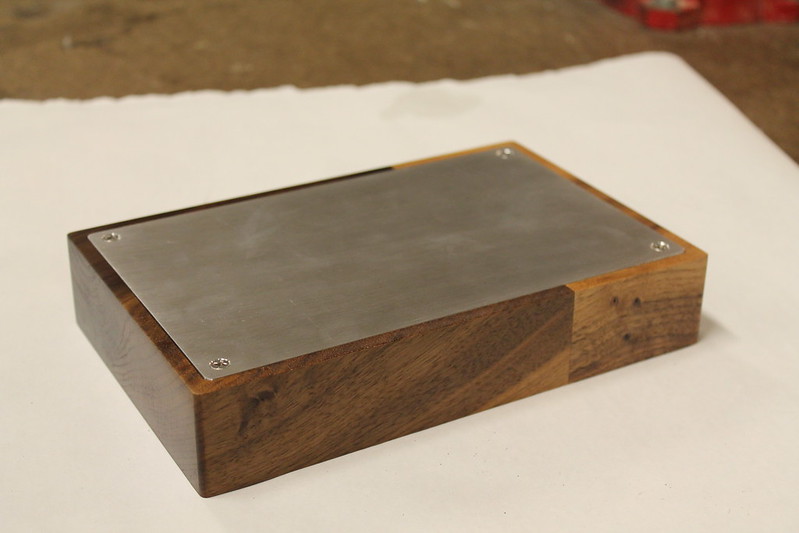 Put the oil finish on and added some threaded inserts. It’s all ready for the PCB’s and components. 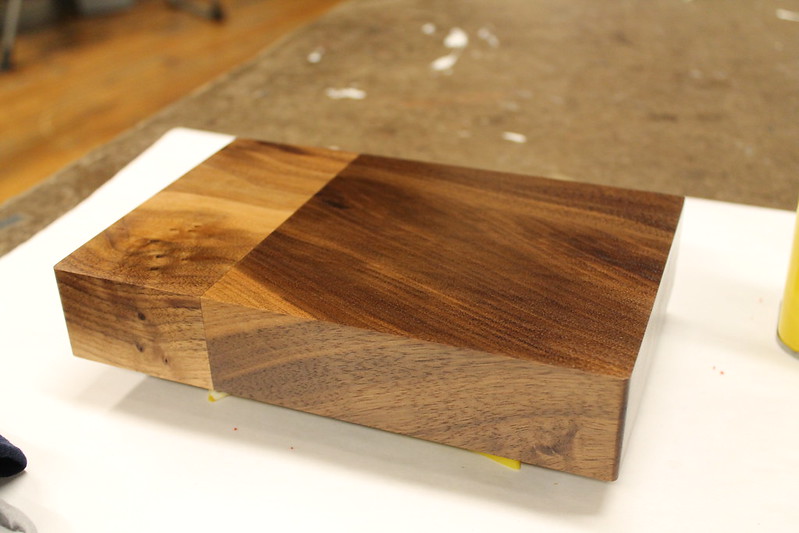 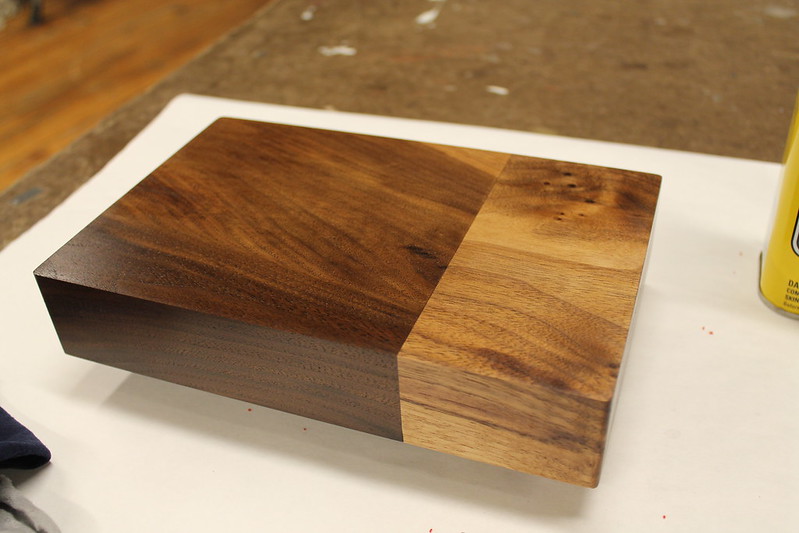 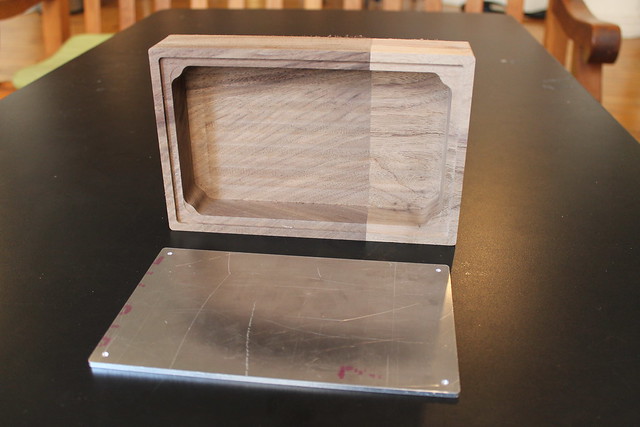 Working on a walnut and aluminum enclosure for the fantastic Weezie. So far, glued up some walnut and did some initial CNC work. More to come. 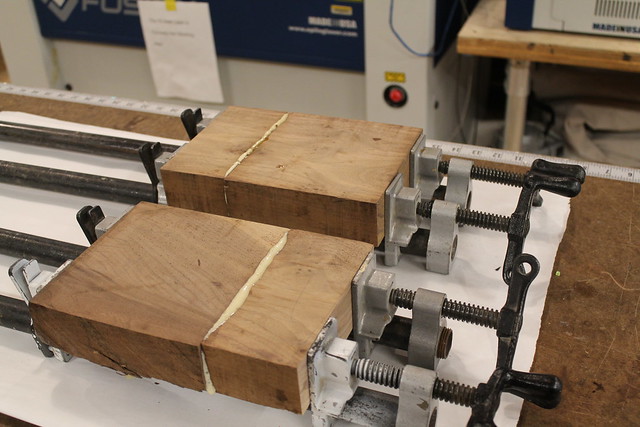 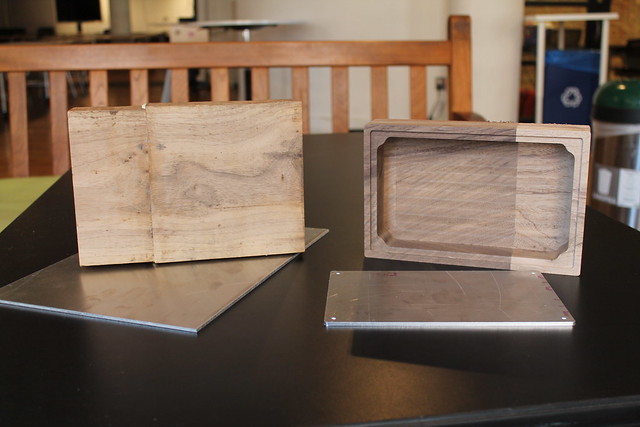 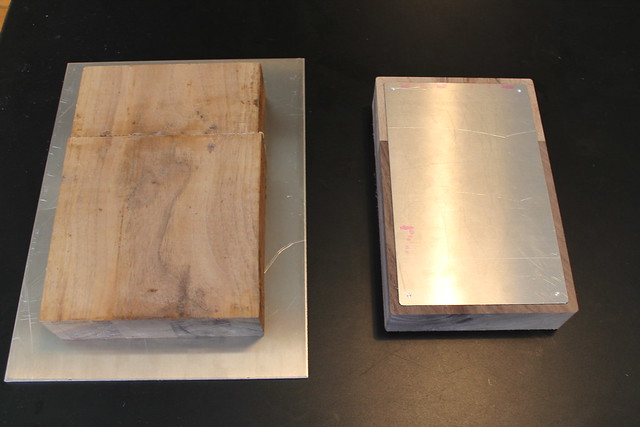 Tags: CNC, collaboration, digital fabrication, enclosure
Posted in People I want to be when I grow up | No Comments »

My friend Matt Epler asked me to show him how to make baseball bats for a fun project of his. Big Bats is a search through historical data (1903-2013) for performances by players who seemed like they were literally playing with a larger bat than everyone else.

Great job Matt. And the Mike Shmidt bat is hysterical. Another case build for the video artist Gabriel Barcia-Colombo. This time for his piece A Point Just Passed.

In Gabe’s words: “A time card punch clock with a video person projected into a dome on top. As the viewer punches the time cards, the person gets older based on time punch increments. At the last punch the dome goes dark and is not to be reset until the next day. Viewers virtually erase the youth of the person through the passage of time. With each punch the memory of one’s childhood is further erased from the dome. It is possible that some viewers may never experience the full length of the piece.”

For Those Who Wait Case Build I recently built a crank with wooden case for the video artist Gabe Barcia-Colombo. It is for his piece For Those Who Wait.

In his words: “”For Those Who Wait” is an interactive video sculpture about the physicality of time. 10 video projected clocks hang motionless in a room. As the viewer winds up a crank the clocks come to life, their hands spinning out of control until they self destruct in a variety of animations.”

Turning the crank and controlling the projected clocks is very satisfying.

Solar Panels Finally Turned on at the Orphanage I put a lamp up for auction a few months back for the Kids of Kathmandu enLIGHTen Project.

The money raised from the enLIGHTen Project bought solar panels for an orphanage in Nepal. Two days ago they turned on the power and now the kids have light. Kind of amazing. I built the physical installation for a video projection piece called Farm, created by Gabe Barcia-Colombo. Gabe projected video on to the physical ant farm I built. This sucker was 6′ by 4′ and probably weighed over 200lbs. It was a great project to be a part of. Farm seeks to augment the vision of the metropolis by visually transforming the city into a human ant farm. The piece approaches normal scenes of daily city life as an anthropological study. Ants and humans have many similarities. Both have huge populations or swarms concentrated in relatively small spaces, but unlike ants, human beings are inherently selfish.

The piece showed at the Dumbo Arts Festival

CheckNChewShort from Tyler DeAngelo on Vimeo.

Check ‘N Chew is a really fun project I’ve been working on with Matt Richardson and Tyler DeAngelo. Basically, when you check into Foursquare you get a gumball. I’ve learned that an off-the-shelf gumball machines are a bit flaky and gumballs do not come in a standard size, but the project turned out great and working with these guys has been a dream. We even got the machine covered by Engadget. Tags: gumball
Posted in Finished Project, Group Project, People I want to be when I grow up | No Comments »